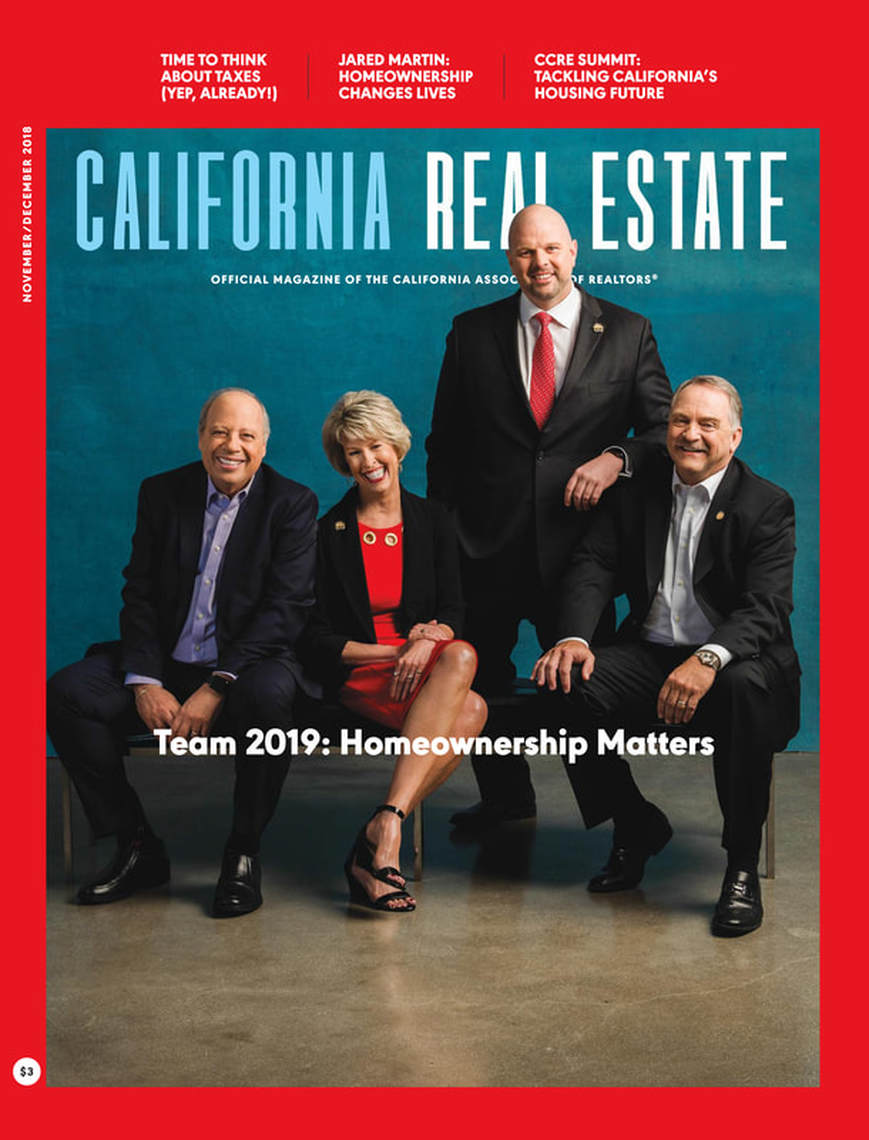 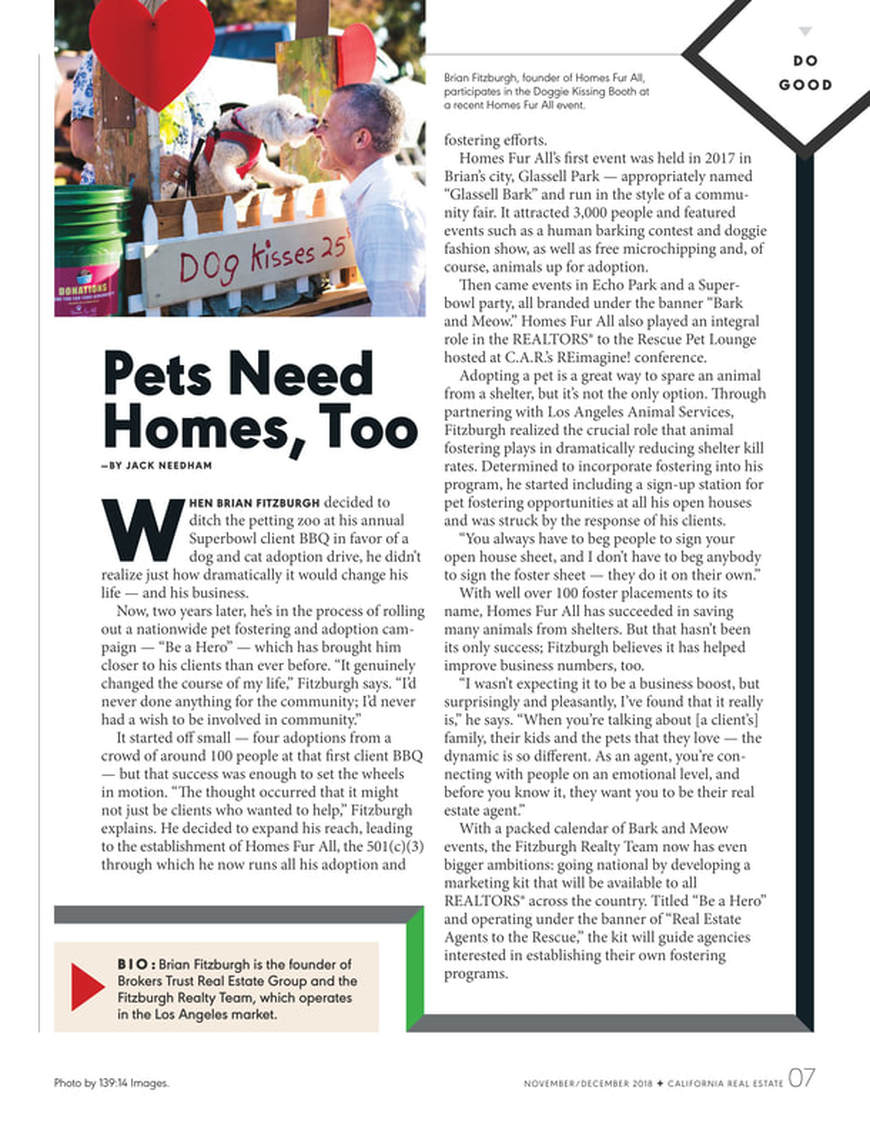 Glassell Bark Community Block Party & Pet Rescue Adoption Glassell Park Neighborhood Council
POSTED 10:59 AM, JUNE 9, 2018, BY GAYLE ANDERSON
3750 Verdugo Road, Glassell Park
http://www.GlassellBark.com
Find a four legged friend at the Glassell Bark – and Meow – Community Block Party and Pet Rescue Adoption event. From Noon until 3pm, we can meet animals needing a forever home and get information about their care and feeding. By the way, there are free goodie bags for the first 100 guests.

Boulevard Sentinel - July 2018 Issue
GLASSELL BARK!
​Yappy Days in NELA
Some 75 pets – dogs, cats and a guinea pig – were adopted at the second annual Glassell Bark! (and Meow) block party and pet rescue event on June 9.
The event drew over 5,000 pet owners, wanna-be pet owners and other animal lovers to Verdugo Rd. near the Glassell Park Rec Center. In addition to the adoptions, 200 pets were microchipped for free and 75 vouchers were handed out for low-cost spaying, neutering and vaccinations – all amid a festival of games, giveaways, contests and music. The next Bark! will be in Eagle Rock on Sunday, October 28th. 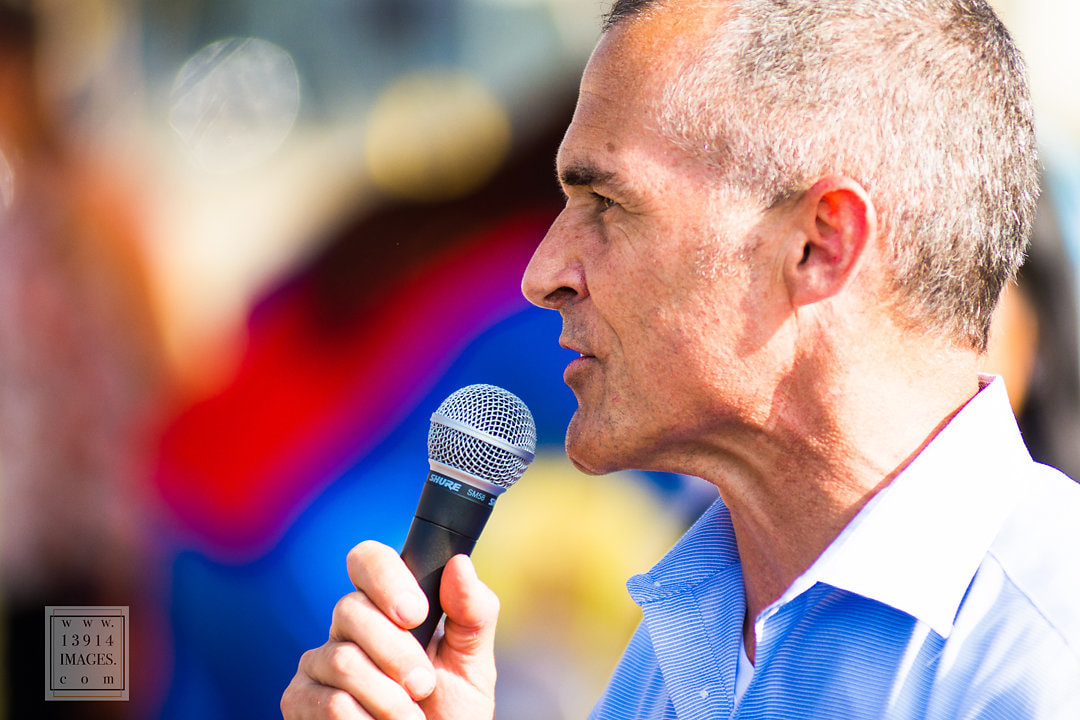 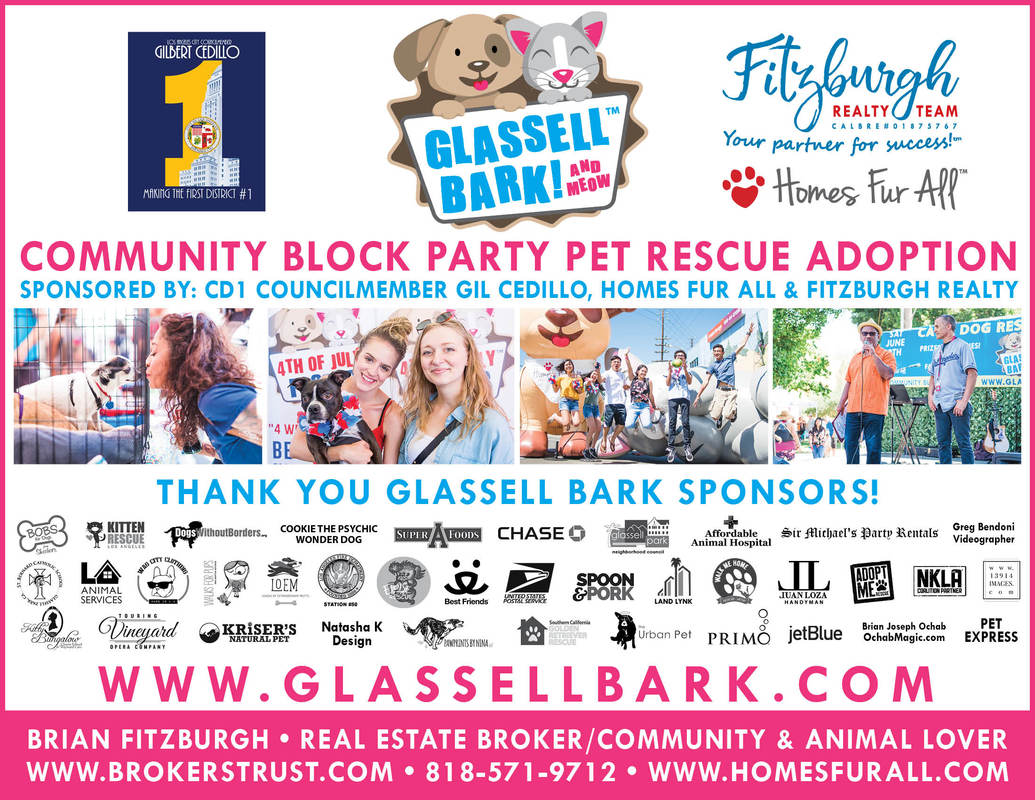 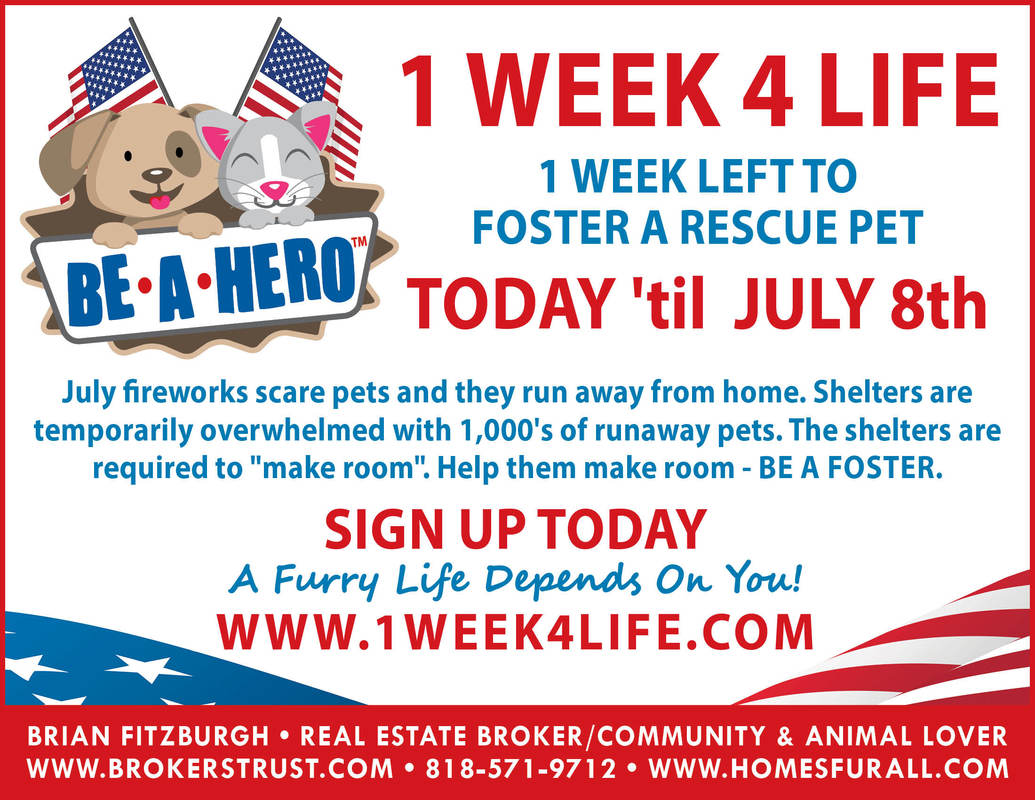 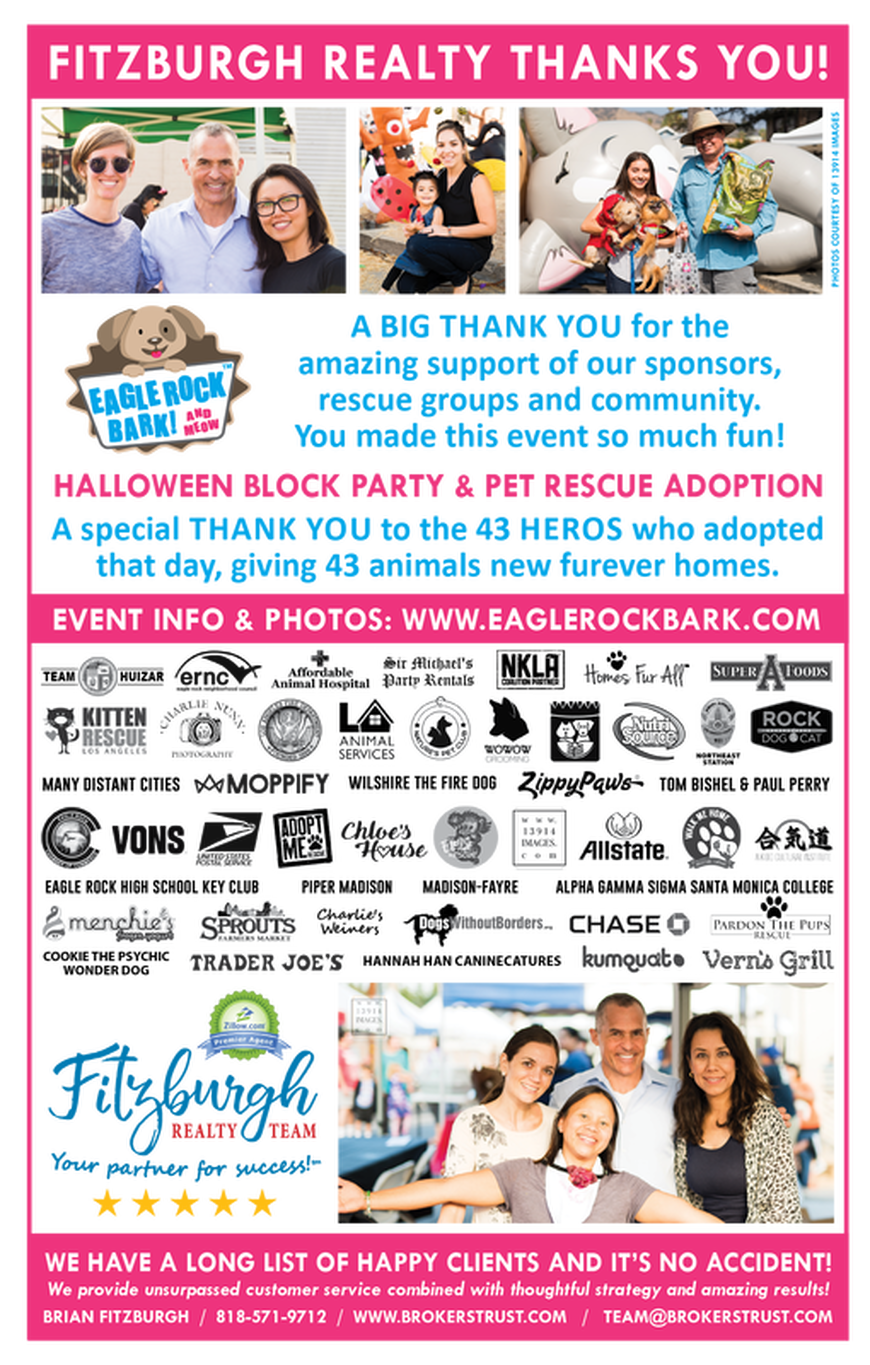 Eagle Rock Goes All Out for Halloween-Themed Adoption Fair
BY HENRY GIARDINA - NOVEMBER 7, 2017
When Eagle Rock decides to throw a dog- and cat-centric block party, they don’t hold back. Last weekend, “Eagle Rock Bark and Meow” drew crowds by promising free microchipping, spay and neuter vouchers, pumpkins, dog and cat treats, and a full-on “Trick or Treat Village” for kids and dogs alike. The LAPD K9 Unit brought their Dalmatian lab Wilshire to teach kids how to “stop, drop, and roll,” while neighborhood dogs showed off their Halloween costumes for all to see.

​The event, one of a series of year-round Northeast L.A. adoption fairs, was run fully by volunteers and was sponsored by Homes Fur All, Fitzburgh Realty & Eagle Rock Chamber of Commerce. 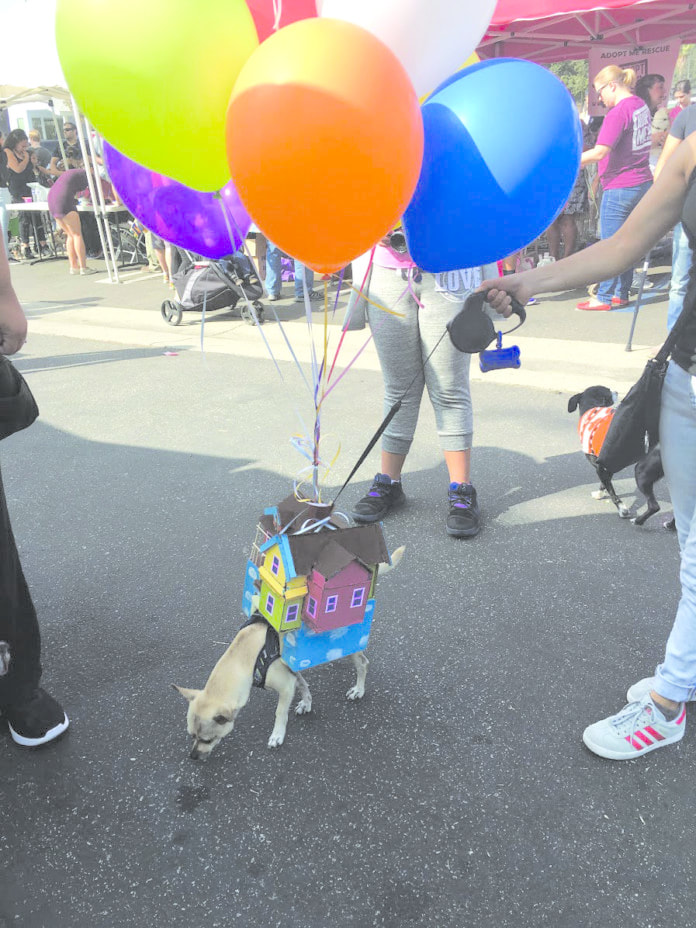 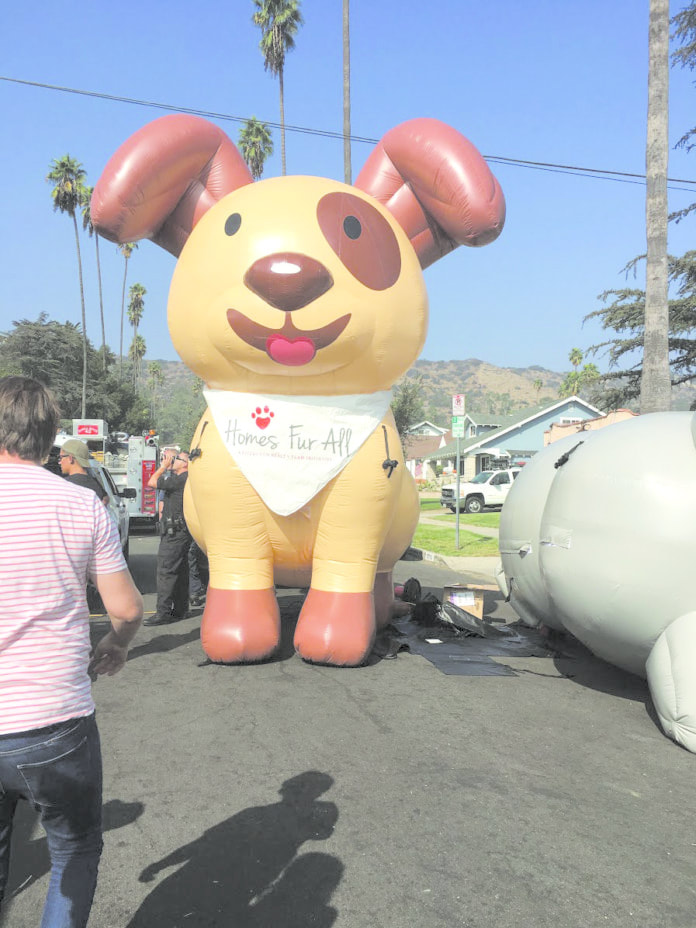 Doggy danger for letter carriers:
Taking the bite out of mail delivery
POSTED BY EDITOR ON OCTOBER 29, 2017 IN GOVERNMENT

​How do you stop dogs from biting U.S. Postal Service letter carriers?
Dog-bite danger seems to be a problem for letter carriers for as long as the federal government has been delivering mail, so the Postal Service Sunday will try to make things a bit safer for their walking workers at the Halloween Eagle Rock Bark Pet Safety & Community Block Party.

The Eagle Rock City Hall gathering is really a “doggie and kittie adoption event,” but postal authorities decided it would be a good time to show people how to avoid harming their letter carriers. “Nearly 3,000 attendees are expected at this event to bring community members of Eagle Rock and their pets together to promote pet safety,” according to the USPS.

“Dog Bite prevention flyers will be handed to customers to promote customer awareness.  Pet Forever Stamps and other pet philatelic items will be available for retail sales.” Officials pointed out that the postal service “receives no tax dollars for operating expenses, and relies on the sale of postage, products and services to fund its operations.”
The event is sponsored by Homes Fur All, Fitzburgh Realty and the Eagle Rock Chamber of Commerce. “This event will be Halloween themed with a Trick-or-Treat Village full of fun games, contests, freebies and more,” officials said.
Organizers said they are trying “to bring the people and pets” of the community together.

The pet adoption event, with food trucks, carnival-like activities and live music, will run from 1 to 4 p.m. at 2035 Colorado Blvd.

Halloween Happenings In
​Eagle Rock, L.A. 2017
'Tis the ghostly season! Grab your calendars, and save the dates for the sweet and spooky events coming up nearby.
By Susan C. Schena (Patch Staff) - Updated Oct 22, 2017 12:52 pm ET

LOS ANGELES – It's that time of year: Things are getting spooky! We've rounded up the best Halloween and autumn events going on throughout the region, including the spookiest haunted houses, Oktoberfests, harvest fairs, craft shows and Day of the Dead celebrations, along with those very charming, small-town, trick-or-treat carnivals.

​The goal of this event is to unite people with their future pets! The party will feature low-cost vaccinations, pet rescue adoption, Trick-Or-Treat Village,  Costume Contest for Kids and Doggies, Human Barking Contest, Doggie Kissing Booth, food trucks, a live band and more.

What's Going on for Halloween in Eagle Rock?
On October 29, Bark Halloween Party, Trick-or-Treat Village & Pet Rescue Adoption is happening in Eagle Rock. Come out, have a good time and help find a home for dogs and puppies in need!

Boulevard Sentinel - October 2017
​Calling All Animal Lovers Eagle Rock is getting its own Bark! this month, a combination block party and pet adoption event pioneered and produced by Fitzburgh Realty of Glassell Park. The Eagle Rock Bark! follows on the heels (paws?) of the immensely successful Glassell Bark! in June. The Eagle Rock version will have all of the games, contests, prizes and freebies that made the earlier Bark! a blast, plus a Halloween trick-or-treat village. At the Bark! you can get your pet microchipped for free and vaccinated, spayed or neutered for low-cost. And, of course, you can adopt a dog or cat, or a dog and a cat. Eagle Rock Bark! and Meow / Sunday, Oct. 29 / 1 p.m. to 4 p.m. / 2035 Colorado Blvd (at Maywood Ave.) / Free admission 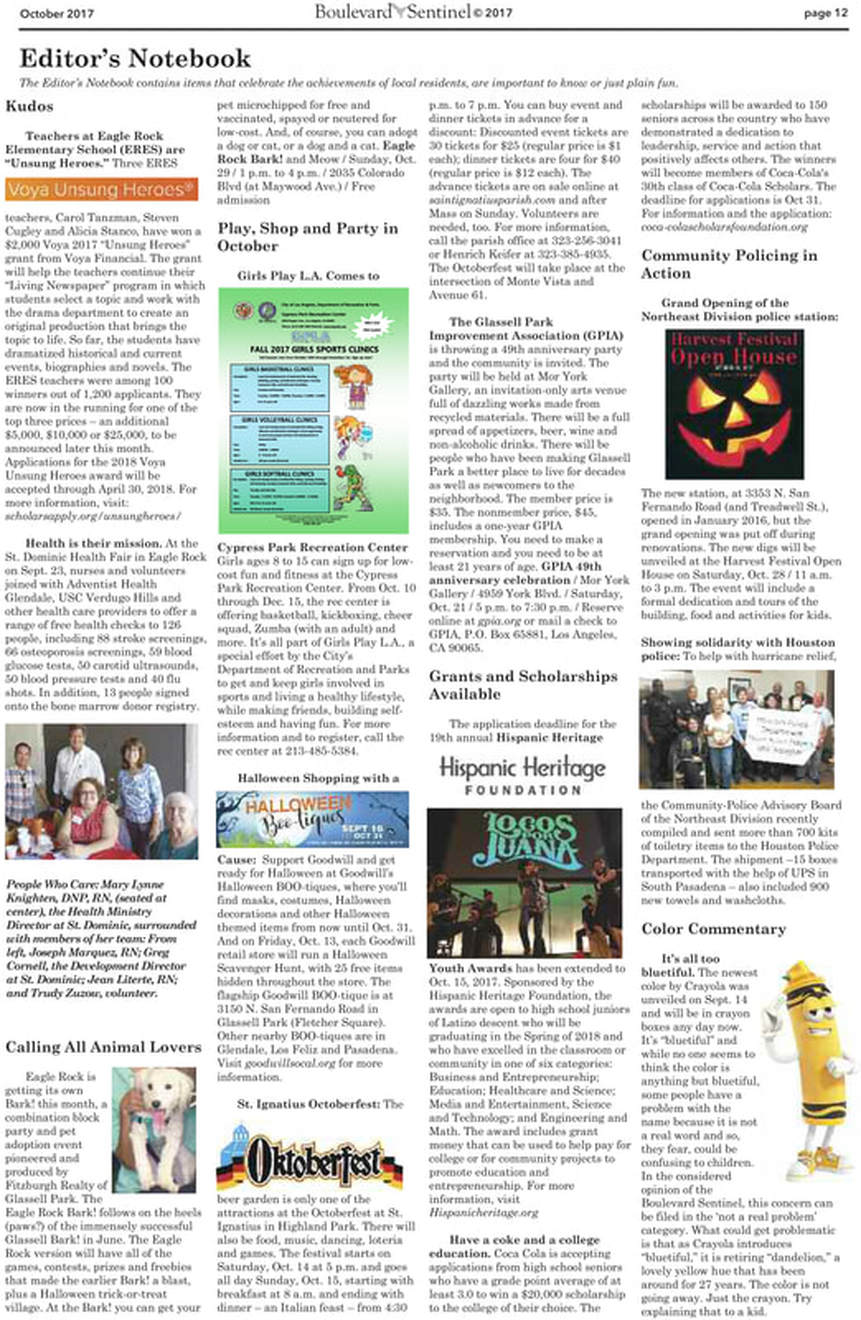 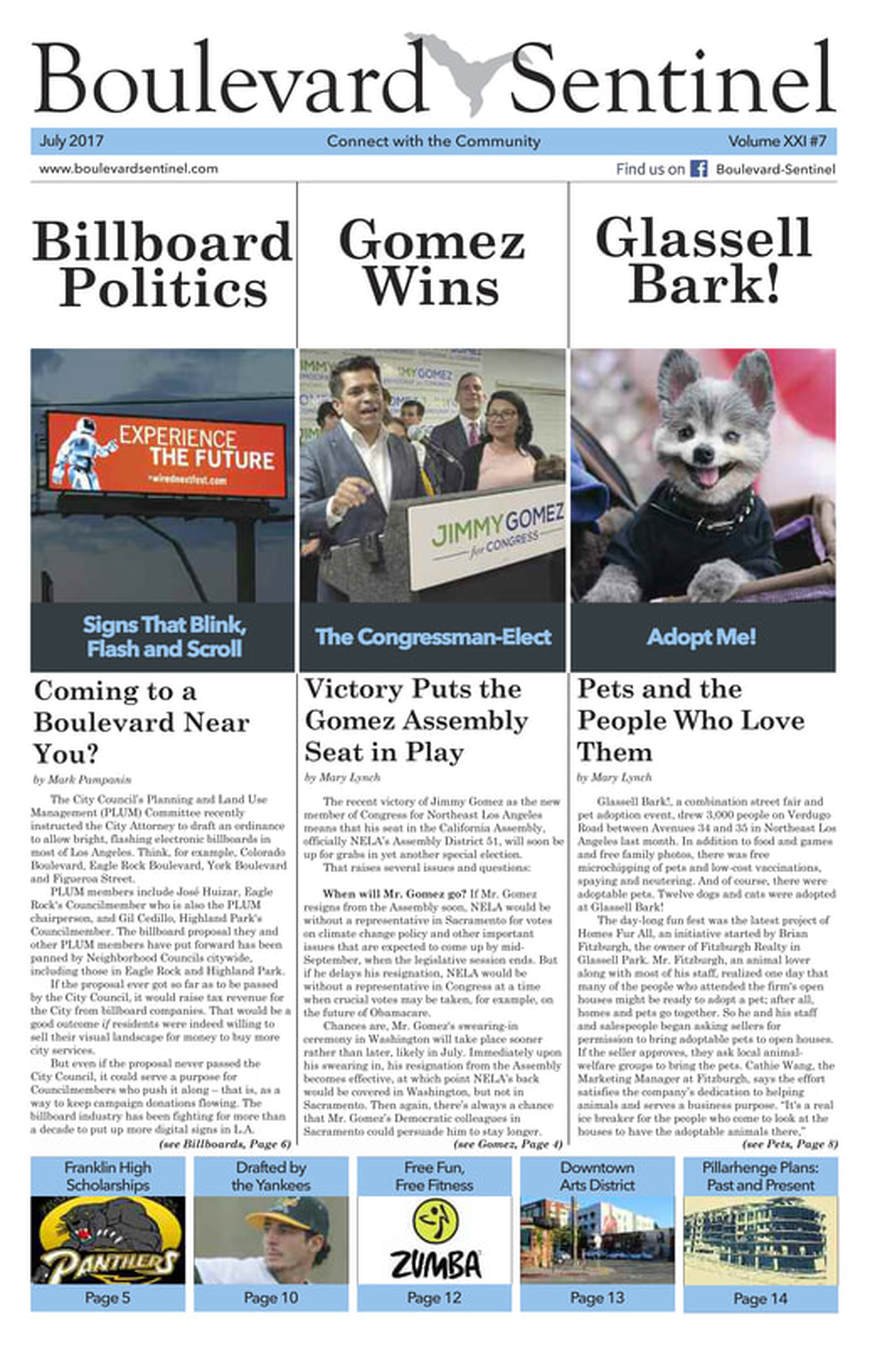 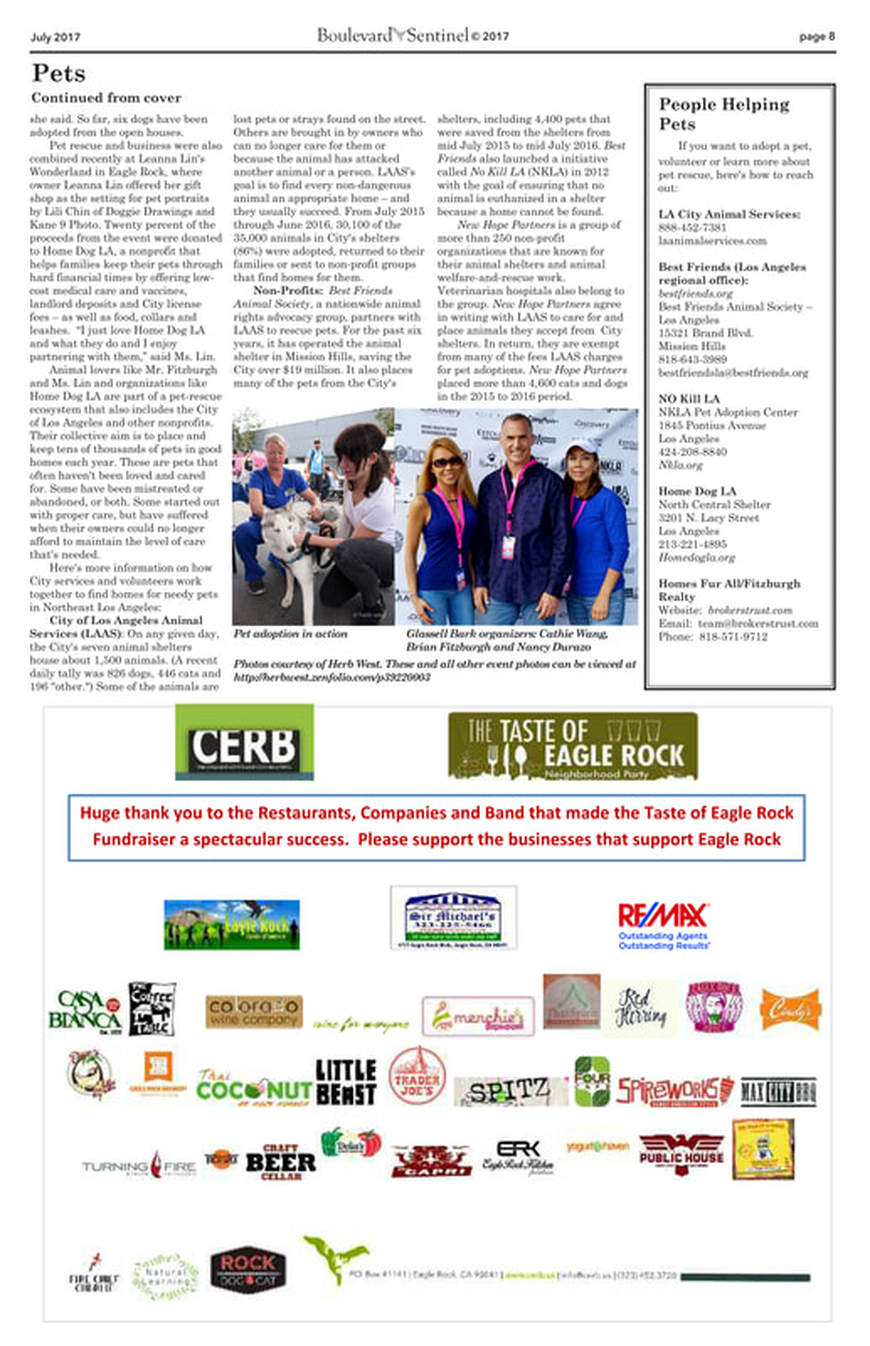 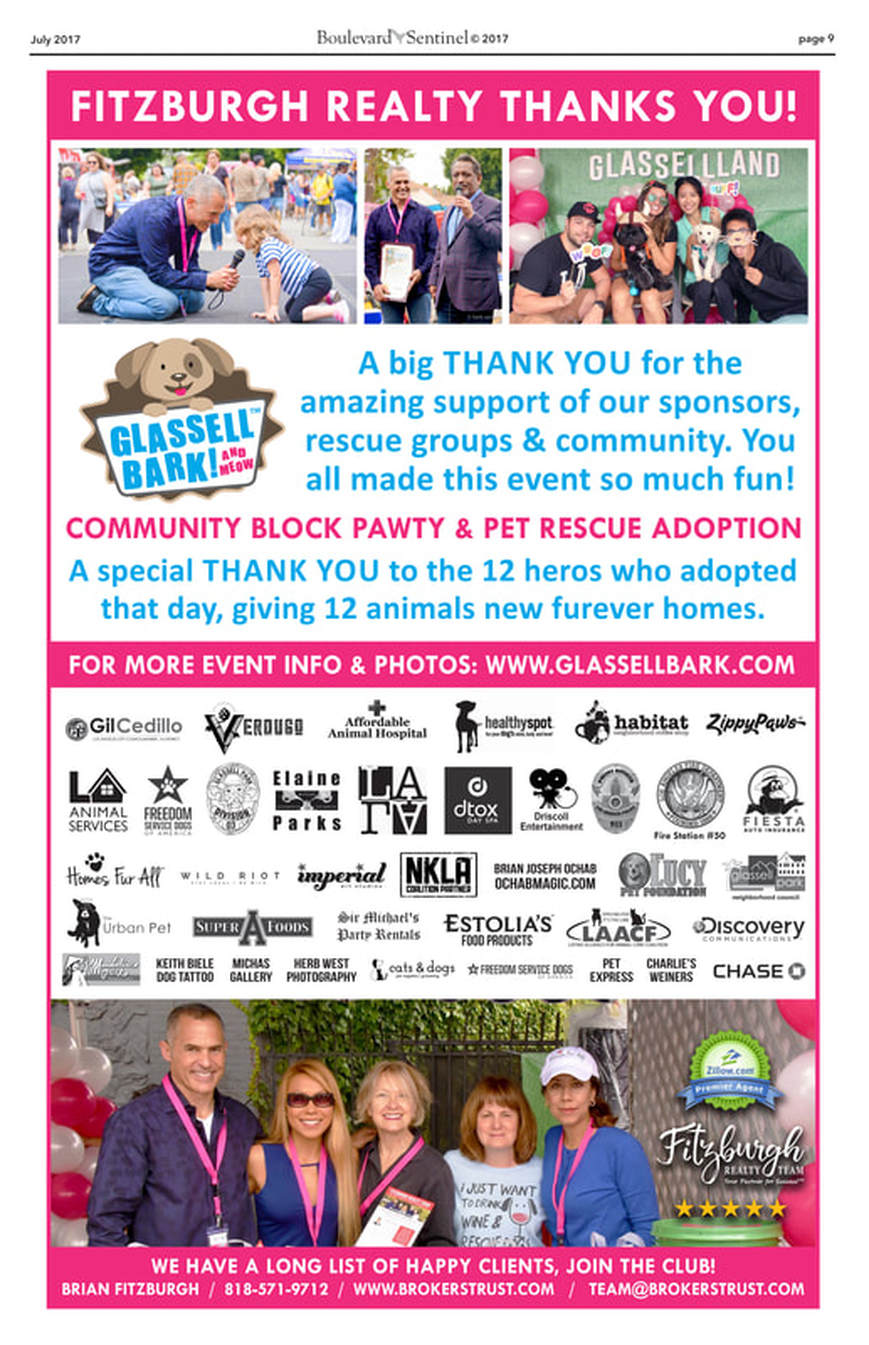 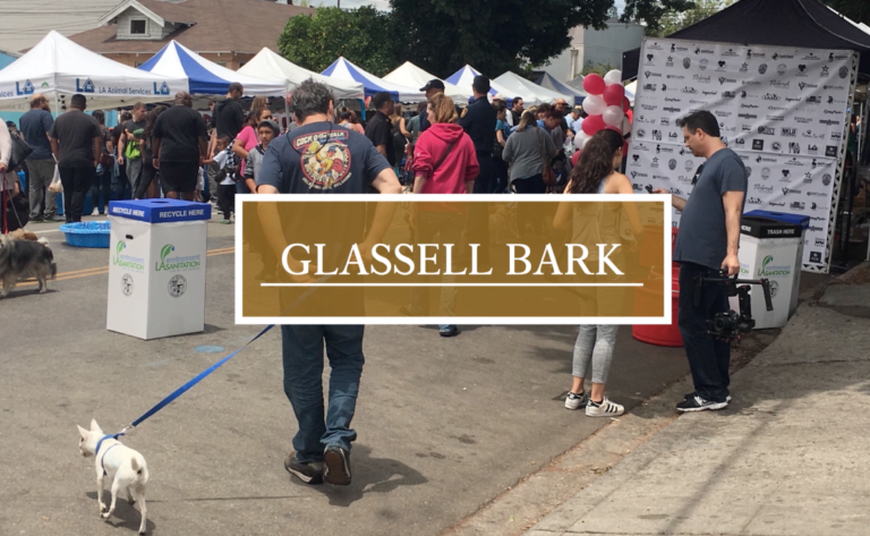 ​If you live in or near Glassell Park in East L.A., chances are you’ll have noticed something peculiar about the neighborhood. It belongs to the dogs.

No, seriously. Dogs are everywhere. Some have owners, some don’t. Many just show up whenever they please to walk along Division street – Glassell Park’s main drag – to socialize and show off their total independence. Street dogs aren’t just a thing in GP: They run this town. The neighborhood, with its plentitude of dog-friendly hikes and parks, is one of the more ideal L.A. locations for first-time and veteran dog owners alike.

That’s why the citizens of Glassell will be coming out in full force for “Glassell Bark,” an adoption event and block party, set to take over Verdugo Ave between 34 and 35 streets on June 10. Sponsored by the Fitzburgh Realty Team, City Councilmember Gil Cedillo, and famed neighborhood hangout Verdugo Bar, Glassell Bark will bring together residents of Glassell for a range of family-friendly (not to mention dog-friendly) activities, including work showcased by local artists and vendors, free microchipping for pets, and a “human bark contest.” Family photo shoots (pets included, of course) are also on offer. 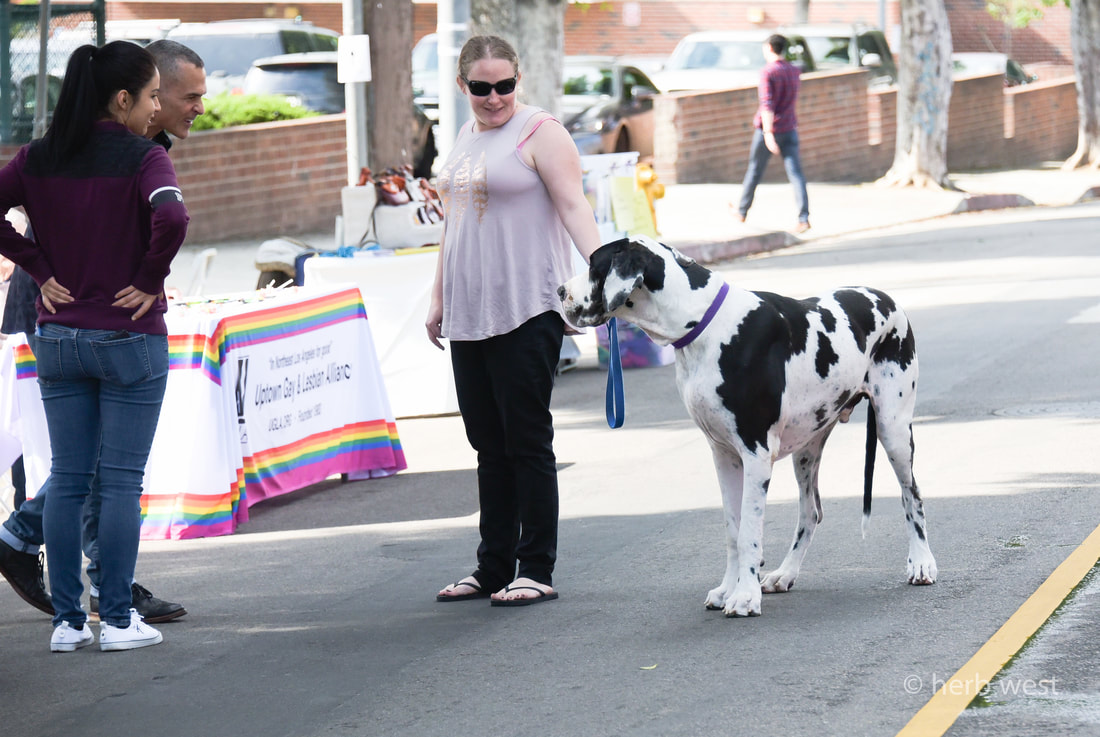 Even folks who aren’t dog owners will most likely find something to love about “Glassell Bark.” Maybe you enjoy the company of dogs but aren’t quite ready to adopt one. Or perhaps you’re thinking about adopting but aren’t quite sure. For pet owners and the pet-curious, “Glassell Bark” will offer a wealth of information from neighborhood residents.

​The event is volunteer-run and totally free, and Verdugo Bar will be serving its signature cocktails all day long, offering all proceeds to Freedom Service Dogs of America Charity.